Approaching the event horizon of a supermassive black hole

The planned GRAVITY instrument will use optical interferometry to track the motion of matter in close proximity to the Galactic Center's black hole.
23 June 2009
Frank Eisenhauer

In the past decade, high-angular-resolution IR imaging and radio interferometry showed beyond any reasonable doubt that the Galactic Center harbors a supermassive black hole. However, current observations only provide indirect insights into the physics operating close to its event horizon, the boundary in spacetime that delineates when light from inside can never reach the outside observer. Most galaxies are known to harbor such supermassive black holes, but the Galactic Center is unique because of its proximity. At a distance of only about 25,000 lightyears, the Galactic Center is a hundred times closer than Andromeda, our nearest large neighbor galaxy. With a mass of about 4 million suns, the radius of the black hole's event horizon is about one tenth of the Earth-Sun distance. This corresponds to an angular size of approximately ten microarcseconds on the sky, similar to that of a coin on the Moon as seen from Earth. Although this is a very small angle, the Galactic Center hosts by far the largest black hole in the sky, in projection, of which detailed studies are now becoming feasible with the GRAVITY1 instrument currently being developed.

The best spatial resolution one can achieve with state-of-the-art optical telescopes is a few tens of milliarcseconds, while we can measure positions with a precision of a few hundred microarcseconds. However, to track the motion of matter on its final orbit around the Galactic Center's black hole, we have to reach 10–100 times higher resolution. Radio astronomy has taught us how to gain such factors using interferometry, a technique that combines incoming signals from several telescopes. The corresponding resolution is limited by the maximum separation of the telescopes rather than the size of one individual aperture. Unfortunately, astronomical interferometry is exceedingly more difficult at optical wavelengths (as compared to radio ones), because in the visible regime we do not have the equivalents of electrical amplifiers and mixers. We also have to control the signal path to a fraction of the wavelength, which is hundreds of nanometers in the optical realm as compared to centimeters at radio frequencies. Nevertheless, several optical interferometers are in working order, including the European Very Large Telescope Interferometer (VLTI: see Figure 1) in Chile. However, current-generation interferometers do not currently provide the sensitivity and accuracy required for the Galactic-Center black-hole experiment. Therefore, we assembled a pan-European consortium of researchers and initiated the GRAVITY project to upgrade the VLTI with a second-generation instrument employing the most recent technology, including integrated optics, IR wavefront sensing, and laser metrology (see Figure 2). 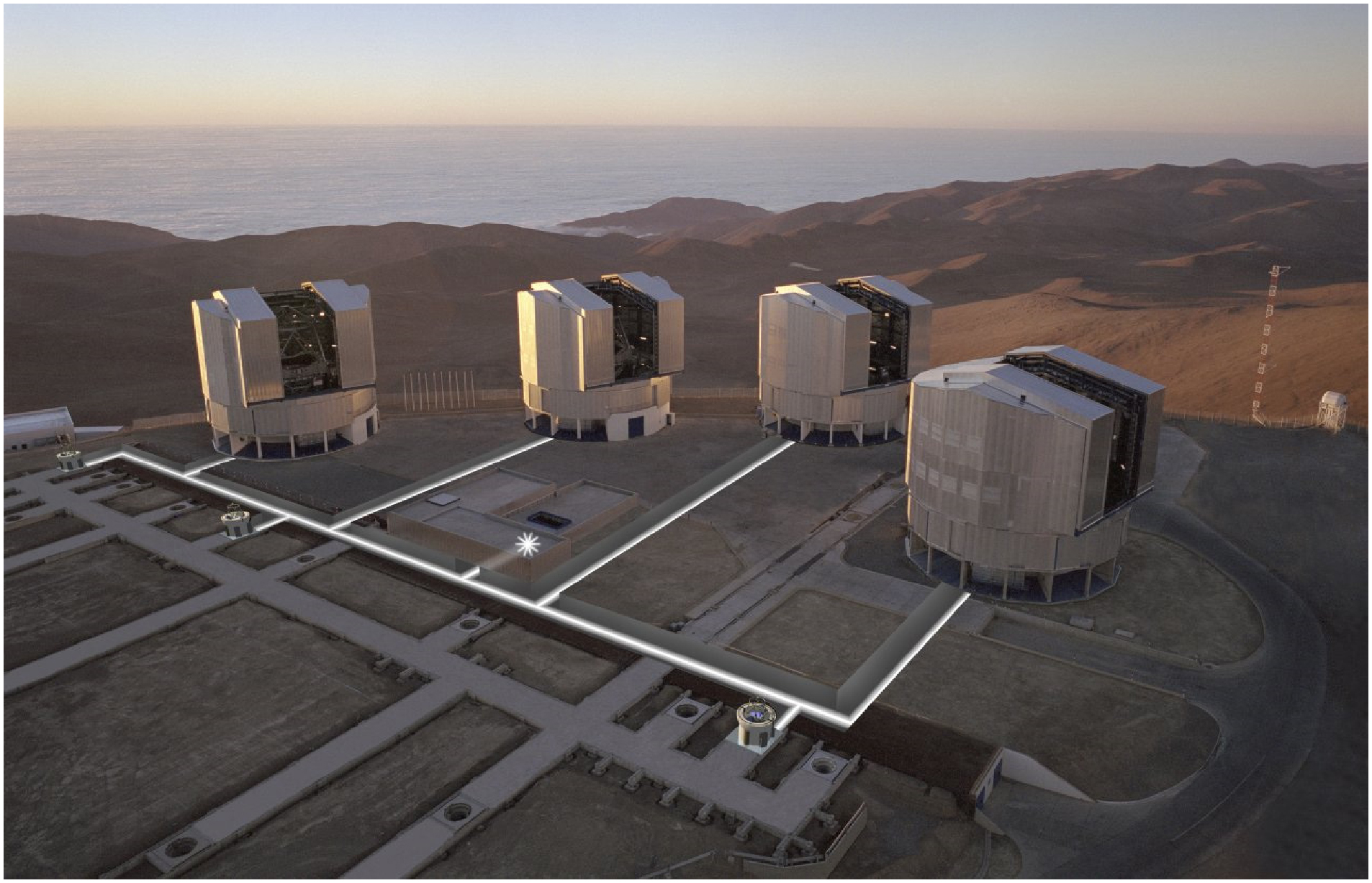 Figure 1. The Very Large Telescope Interferometer (VLTI) on Paranal Mountain in Chile is the world's largest optical interferometer. GRAVITY will combine the light of the four 8m (diameter) telescopes to track the motion of matter just before it is ultimately hidden by the event horizon of the Galactic Center's black hole. (Image is courtesy of the European Southern Observatory.) 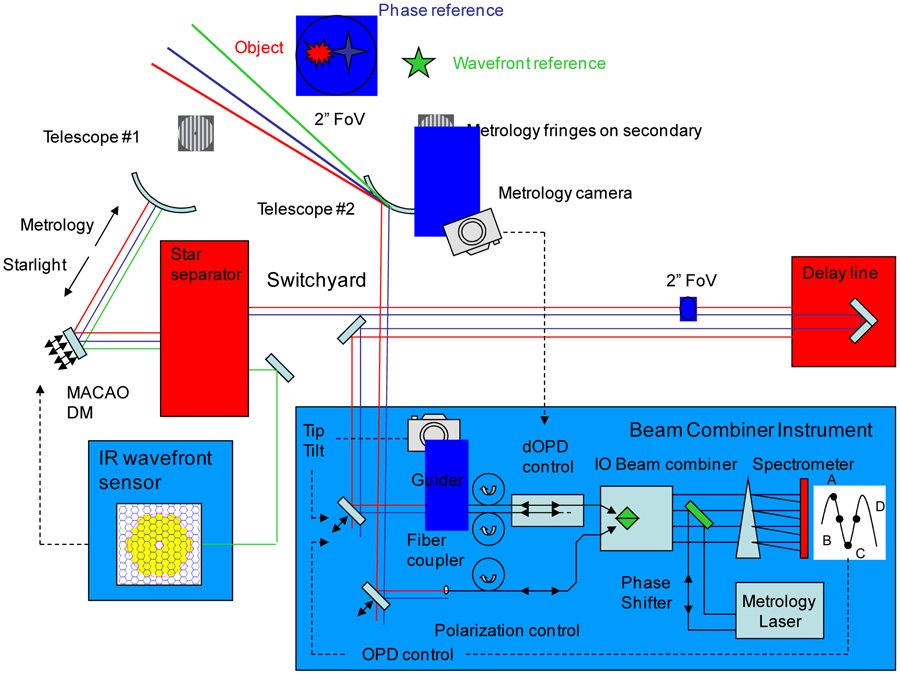 Figure 2. GRAVITY will measure the position of an object (red) relative to a nearby reference star (blue) by combining the measured signals from several telescopes. Comparing the optical-path difference (OPD) between the two objects with an accuracy of a few nanometers, GRAVTIY will track the motions of objects orbiting the Galactic Center black hole with ten microarcsecond resolution. The instrument incorporates the latest technology in IR adaptive optics (AO) to correct for image degradation caused by atmospheric turbulence (lower left, using the light from a bright nearby wavefront reference star, green), optical-fiber control and integrated optics for beam combination (lower right), and a novel laser-metrology concept tracing the complete optical path from the telescope's secondary mirror to the beam combiner. DM: Deformable mirror. MACAO: Multi-application curvature AO. dOPD: Differential OPD. IO: Input/output. FoV: Field of view.

The VLTI with its four 8m (diameter) telescopes and a total collecting area of 200m2 is the largest existing optical interferometer that allows both imaging and astrometry (the accurate measurement of separations) of faint objects such as the Galactic Center. We will, for the first time, use its unique two arcsecond field of view to obtain simultaneous interferometry of the black-hole region and a bright reference star using all four telescopes. This simplifies the experiment to a differential measurement, which is key to reaching an astrometric precision of ten microarcseconds.

The second major new element of GRAVITY is its use of IR wavefront sensors,2 which will correct for image degradation caused by the turbulent atmosphere, so that the individual telescopes provide diffraction-limited images. (This is a prerequisite before interfering the light of several telescopes.) Usually, wavefront sensing is done at visible wavelengths, but the Galactic Center is hidden behind more than 30 magnitudes of dust extinction in the visible regime, and only longer-wavelength light can pass through. This is why GRAVITY will operate at a wavelength of 2.2μm.

GRAVITY's beam combiner is based on fiber-fed integrated optics. The light from the telescopes is first coupled to special IR-transmissive zirconium fluoride fibers.3 We then align the polarization of the light from the four telescopes and compensate for the differential optical path by twisting and stretching the fibers. Finally, the light is coupled to an integrated optics chip,4 our equivalent of an electronic integrated circuit. This chip is based on optical waveguides and provides all functions to split, phase shift, and interfere the light of the four telescopes.

Although GRAVITY's measurements are always differential, we have to maintain an optical-path-difference accuracy of 5nm over several hundred meters from the telescopes to the instrument. Therefore, we incorporate a novel laser-metrology7 concept optimized for astrometric accuracy. The laser light is backpropagated from the beam combiners to the telescopes' secondary mirrors, producing fringe patterns that carry the differential optical-path information. These fringe patterns are then observed in scattered light. In contrast to classical laser metrology, GRAVITY measures the full beam and traces the entire optics train, thus reducing all systematic errors to a minimum.

All of these technical advances open up new windows for high-precision astronomy and will, in particular, reveal the mysteries of the Galactic Center's black hole. The orbits of stars in the central lightday no longer follow classical Keplerian ellipses, but they will be twisted by frame dragging from the spinning black hole, a prediction from Einstein's theory of general relativity that suggests that spacetime itself is dragged around a rotating body. This will allow us to test John Archibald Wheeler's curious ‘no-hair theorem,’ which states that a black hole is fully characterized by its mass, spin, and charge, and in particular that its quadrupole moment—the deviation from spherical symmetry—is strictly related to its spin. Zooming in with GRAVITY and tracing the orbits of matter during a flare (an outburst seen about once a day) will bring us even closer to the event horizon. The infalling material will follow the last stable orbit at approximately three event-horizon radii (depending on the black hole's spin) and our measurements will then be fully determined by general-relativistic effects in the strong gravitational field around the black hole, including gravitational lensing. GRAVITY will thus probe the largely unexplored regime of strong gravity.

Following our original proposal in 2005, the GRAVITY project was recommended and approved by the European Southern Observatory's (ESO) Scientific and Technical Advisory Committee in 2007. The instrument is currently in its design phase. Installation and commissioning is foreseen for 2012–2013.

The author represents the GRAVITY consortium, composed of the Max Planck Institutes for Extraterrestrial Physics and Astronomy (both in Germany), the University of Cologne (Germany), Paris Observatory / LESIA (Laboratory for Spatial and Instrumentation Studies in Astronomy) and ONERA (National Office for Aerospace Studies and Research)/DOTA (Theoretical and Applied Optics) members of the PHASE partnership (France), Laboratoire d'Astrophysique de Grenoble (France), Laboratório de Sistemas (Portugal), and ESO.

Frank Eisenhauer is senior staff scientist responsible for near-IR instrumentation. He is also the principal investigator of the SPIFFI (Spectrometer for Infrared Faint Field Imaging)-SINFONI (Spectrograph for Integral Field Observations in the Near Infrared) integral-field spectrometer at ESO's 8m Very Large Telescope. His astronomical research focuses on the Galactic Center's black hole and surrounding star cluster. He started development of the GRAVITY instrument in 2005.