Cryptography relies on digital keys that are shared among legitimate users but must be kept secret from everyone else. Quantum-key distribution (QKD) is a nascent technology enabling this using optical fiber. Unlike today's algorithm-based techniques, the secrecy of the keys formed by QKD can be tested and guaranteed. Indeed, it is the only key-exchange method where the actual level of secrecy achieved does not rely on assumptions about an adversary's computing power or other resources.

Although highly reliable QKD systems have been developed1 (see Figure 1) and even demonstrated,2 some problems still remain. In particular, until now the real-world applicability of QKD has been hampered by its relatively low bit rate of just a few kbit/s or less, which is insufficient for many applications. For example, connecting many users to a QKD-fiber network requires a dramatic increase in the secure bit rate. High bit rates are also required for perfectly secure data communications using the ‘one-time pad’ cipher, for which the key and data bit rates must match each other. Here, we focus on a new innovation that allows bit rates in the Mbit/s range, greatly expanding the usefulness of QKD.

Figure 1. Current fiber quantum-key-distribution (QKD) technology—such as the Toshiba system used in the SECOQC (Secure Communication based on Quantum Cryptography) QKD network—has a bit rate of 10kbit/s or less.

QKD relies on sending encoded single photons along a fiber. Any attempt by a hacker to intercept these photons scrambles their encoding, alerting the users that their key is no longer secret. The bit rate of current QKD systems is limited by the rate at which photons can be detected at the end of the fiber. Unfortunately, the most convenient and common detectors—avalanche photodiodes (APDs) made of indium-gallium-arsenide and indium-phosphide semiconductors—require a long dead time after each photon event, thereby limiting their detection rate. This has stimulated a great deal of research on new types of photon detectors in recent years.

In an APD, an incident photon triggers an avalanche of millions of charge carriers (electrons or holes), which can be sensed by electrical circuitry. The problem is that some of these charge carriers can be trapped in the device and later stimulate a second, spurious detection. As these noise counts cause errors in the key, detectors must operate on the basis of long dead times to allow any trapped carriers to decay. This limits the clock rate of current QKD systems to around 10MHz and thus the secure-key bit rate to under 10kbit/s for a 20km fiber.

We have developed a method to detect much weaker avalanches.3 We use a ‘self-differencing’ circuit to subtract the APD output from that in the preceding period. This cancels out the periodic capacitive response of the diode, leaving only the weak, photon-induced avalanche signal. As a result, we can now detect avalanches that are over an order of magnitude weaker than previously. By reducing the number of avalanche carriers, we strongly reduce the chance for an electron to be trapped, allowing the detector to operate at GHz clock rates. The new detector has another important advantage for quantum communication as well: it can count the number of photons in an incident-light signal.4 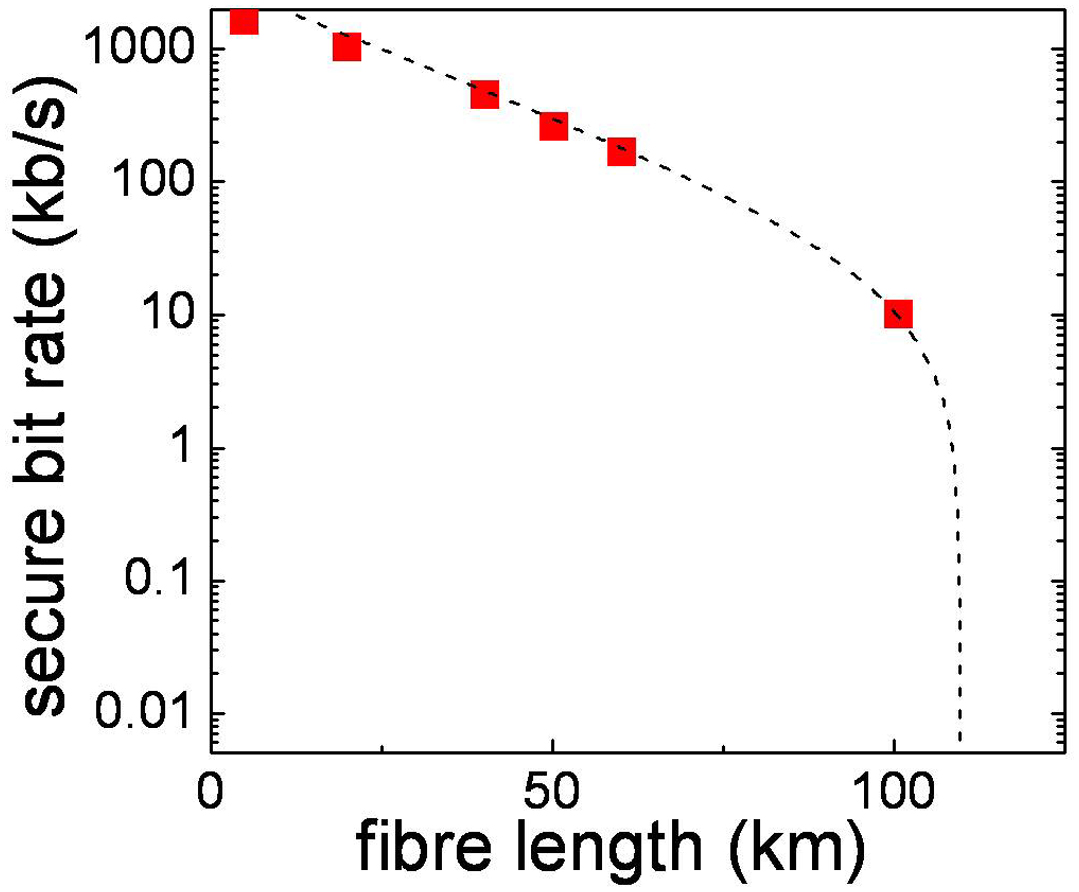 By employing self-differencing APDs we can increase the clock rate of the QKD system to 1.036GHz, approaching the value used in conventional optical communications. This allows a sifted bit rate of 9Mbit/s over 20km of fiber, which in turn provides 1.02Mbit/s of secure key (see Figure 2).5 This is the first time that a secure bit rate exceeding 1Mbit/s has been achieved. For longer fibers of 100km, a secure bit rate of >10kbit/s could still be obtained.

In summary, we have developed a simple semiconductor single-photon detector capable of operation at GHz clock rates, facilitating an increase in the QKD secure bit rate to 1Mb/s over a 20km fiber. This dramatic increase will allow QKD applications to secure networks connecting many users, as well as one-time pad encryption with significant bandwidths. Future work will concentrate on developing a compact and robust system for GHz QKD.

Part of this work was funded by the European Commission's Framework 6 Information Society Technologies program through the integrated project SECOQC.