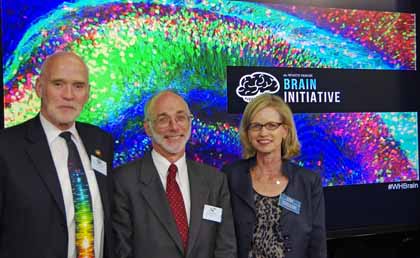 Leaders of the National Photonics Initiative (NPI), an alliance of top scientific societies uniting industry and academia to raise awareness of photonics, launched its Photonics Industry Neuroscience Group alongside officials from the White House Office of Science and Technology (OSTP) in conjunction with today's White House BRAIN Initiative conference. Members of the NPI industry group are committing to invest upwards of $30 million in existing and future research and development spending over the next three years to advance optics and photonics technology in support of the White House Brain Research through Advancing Imaging Neurotechnologies (BRAIN) Initiative.

"The NPI industry group is truly the first of its kind -- a multidisciplinary industry consortium focused on developing new optics and photonics technologies to help achieve the President's goals for the BRAIN Initiative," said NPI Steering Committee Chairman Tom Baer. "Launching our industry consortium alongside OSTP signifies our joint commitment to solving the brain's greatest mysteries through optics and photonics innovation."

Members of the NPI Photonics Industry Neuroscience Group attended the White House BRAIN Initiative conference that was also attended by leadership from OSTP, the National Institutes of Health and the National Science Foundation. The conference highlighted new commitments and investments by the federal government, private sector companies, universities and non-profit organizations to support the goals of the BRAIN Initiative.

Coinciding with the launch of President Obama's BRAIN Initiative, the new SPIE journal Neurophotonics launched this year with a special section on the initiative. The special section features a spectrum of papers on optical tools for measurement and manipulation of the brain's neuronal, metabolic, and hemodynamic activity.

The journal's aim is to facilitate collaboration in bridging the gap between neuroscience technology development and application in optogenetics, photoacoustics, spectroscopy, and other fields.

SPIE CEO Eugene Arthurs noted the significance of the photonics community's involvement in the brain effort, pointing out that Alzheimer's disease already costs the nation $200 billion and its cost is expected to rise beyond $1 trillion. With depression, PTSD, Parkinson's and other neurological diseases on the rise, "understanding how the brain works and developing therapies should be urgent national priorities," Arthurs said.

He noted the wide acceptance of the idea "that engineers, physical scientists, computation experts, neuroscientists and practicing physicians have all contributions to make, and must learn to work productively together in a challenging climate for funding."

Research under the initiative is already underway. For example, among those who have won National Institutes of Health BRAIN Awards in conjunction with 11 new technology projects are SPIE Fellow and Optical Engineering editor-in-chief Lihong Wang, Washington University in St. Louis, and SPIE Member Changuei Yang, California Institute of Technology.

Wang and his collaborators will test a way to image the electrical activity of neurons deep inside the brain, using photoacoustic tomography, a variation on ultrasound imaging he invented.

Yang's team plans to develop a light and sound system that will noninvasively shine lasers on individual cells deep within the brain and activate light-sensitive molecules to precisely guide neuronal firing. Yang described his work in a video interview with the SPIE Newsroom last year.