Diffusion tensor imaging (DTI) is an emerging technique in magnetic resonance imaging. Recently, it has been the object of increased interest in neuroscience applications seeking to image brain fiber tracts. Examples are the identification of major white matter tracts in the human brain afflicted by a specific pathology or those particularly at risk for a given surgical approach.

Based on DTI data, fiber tracking now enables the geometrical reconstruction of such tracts.1 However, when attempting to visualize individual fibers, cluttered images are often generated, which makes insights difficult to obtain. It is also necessary to identify different fiber structures with anatomical significance for quantification and comparison purposes. 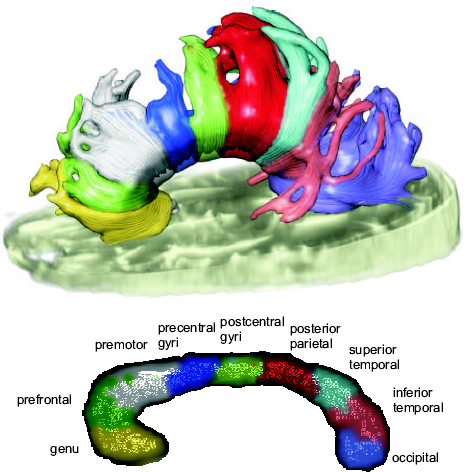 Figure 1. Fibers of the corpus callosum are automatically clustered by our fiber grid. The clustered bundles correspond to anatomical regions as proposed by Davis et al.2

Fiber-clustering algorithms have accordingly been developed to group anatomically similar or related fibers into bundles, as shown in Figure 1. As no user interaction is required, undesirable bias is not introduced. An affinity matrix representing the similarity of fibers is first computed and then used to group fibers into clusters. However, due to the large number of 3D points describing each fiber, existing methods can only map the high-dimensional fiber data to a low-dimensional feature space (FS), with the result that valuable distance information may be overlooked.3

We introduce a framework for automatic and robust fiber clustering. Our new fiber grid (FG) defines similarity more precisely and efficiently than the FS. The use of spectral clustering combined with a new algorithm for detecting the most suitable number of clusters also leads to accurate and understandable results.

The underlying idea behind our FG is to gather more accurate spatial information for calculating the affinity matrix.4 The FG does this much faster than a FS. To perform the calculation, the boundary box around the fiber set is divided into equal 3D cells. For each pair of fibers, the number of cells is determined where both fibers have points inside. The higher the number of such cells, the larger the corresponding value in the affinity matrix. The FG requires only one parameter, namely the side length of the grid cell. This parameter defines the level of detail of the clustering in a comprehensible and predictable way: the smaller the cells, the finer the clustering result. Figures 2 and 4 demonstrate the advantage of our FG when compared to a FS. 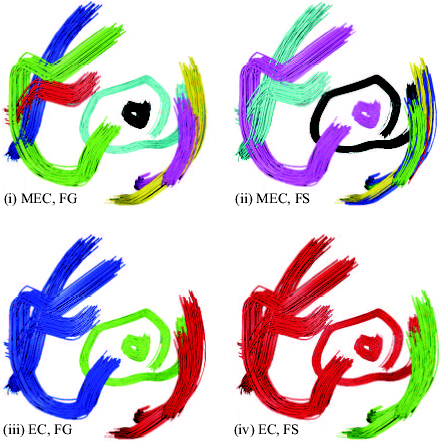 We also use spectral clustering, already popular in fields such as image segmentation or speech recognition because the technique is able to recognize clusters in complex data sets. We extended and optimized multiple eigenvector clustering5 (MEC) for application to the fiber-clustering problem. Our adaptation includes the computation of the affinity matrix with our FG, the automatic determination of the number of clusters by our eigenvalue regression method,4 and a computation of the final clusters using a complete-linkage algorithm.

For comparing our extended MEC, we implemented elongated clustering (EC),6 which, to the best of our knowledge, represents the only spectral clustering algorithm that uses multiple eigenvectors and allows for the automatic determination of the number of clusters. Figures 2 and 4 show that only the MEC is able to find finer substructures.

In the literature, several clustering techniques have been proposed. However, the different techniques need to be compared to assess which is the most adequate. We recently proposed a framework for the comparison of clustering methods.7 During the first step of the validation process, physicians create an optimal cluster by manually classifying the fibers, referred to as a ‘ground truth’. The next step requires a measure of clustering quality to quantify the agreement between the manually defined bundles and the automatically generated clusters. To define a measure that meets the criteria of physicians involves validating various clustering quality parameters. This is done by letting physicians create a ranking of a number of clustering results. This ranking is then used as a ground truth for the ranking created by the clustering quality measures. The procedure allows us to analyze and define a new measure that has the highest correlation with the ranking of the physicians. This is then used to analyze the different algorithms by finding the optimal clustering results and comparing their quality measure value. The flowchart of the validation process is illustrated in Figure 3.

Figure 3. Flowchart of the validation framework. 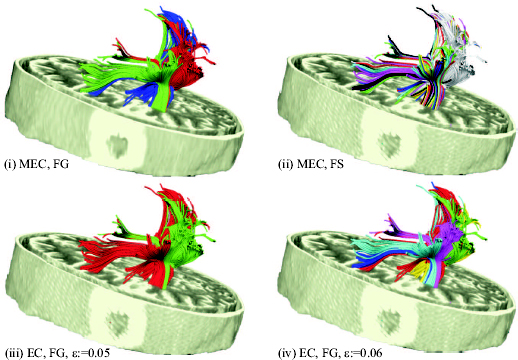 Our new fiber grid approach provides a basis for robust, fast, and easy-to-use clustering algorithms for the imaging of white matter fiber tracts in the human brain. It effectively makes the time-consuming manual adjustment of a feature space obsolete by drastically reducing the a-priori knowledge required for achieving plausible clustering results. Our novel eigenvalue regression method is also capable of determining a reasonable number of clusters because it can account for inter-cluster connectivity. The net advantage is that our MEC can identify inner clusters within coarse structures.

Jan Klein is a computer scientist at MeVis Research working on diffusion tensor imaging. He has published several papers at international conferences related to medical imaging and computer graphics. In 2006, he received an award for one of the best PhD theses in computer science from Paderborn University.

Horst Karl Hahn is a key researcher and vice president at MeVis Research. His current activities are in the field of quantitative medical image analysis and multimodal visualization. In 2005, he was awarded a special prize from Bruker Daltonik for his PhD thesis work on morphological volumetry.

Olaf Konrad is a researcher and key software developer at MeVis Research. He specializes in interaction and visualization processes.

Jan Rexilius is also a researcher at MeVis Research. He specializes in quantitative medical image analysis.

Heinz-Otto Peitgen is a professor of mathematics and biomedical sciences at the University of Bremen and at Florida Atlantic University. In 1995, he founded MeVis Research, Center for Medical Image Computing, which he chairs as president.

Anna Vilanova is an assistant professor and head of a research group in the Biomedical Image Analysis unit of the Biomedical Engineering department at the Eindhoven University of Technology. She received her PhD degree in 2001 from the Vienna University of Technology. Her current research interests are focused on medical visualization and image analysis.

Peter Ledochowitsch is writing his diploma thesis in physics at the Institute for Polymers and Organic Solids at the University of California, Santa Barbara. He is working on organic semiconductors with Prof. A. Heeger.

Philip Bittihn is writing his diploma thesis in the area of theoretical neuroscience. He is working on the spatial propagation of neural activity at the Max Planck Institute for Dynamics and Self-Organization.