Photonics is a player at the FIFA World Cup

The numbers related to imaging and lighting technologies at this year's event show impressive advances over previous years. Dan Curticapean breaks them down.

At the FIFA World Cup, 800 players and their coaches are responsible for showcasing the "Beautiful Game" to the world - the clever tactics, the graceful moves, the spectacular strikes. Behind the scenes, however, the field of photonics has been a most valuable player in the development and ever-increasing popularity of the sport, contributing to lighting technology, image transmission, photography, and even art.

With the shifting of kickoff times into the evening hours, the world of sport -- and of football in particular -- entered a new dimension, both in an aesthetic and an economic sense. The latest in floodlighting technology has been installed in sports arenas, with photonics playing a crucial role.

It is remarkable to note that the first soccer game involving floodlighting was kicked off in Sheffield/England on October 14, 1878, at 7:30 p.m.[1] - [3] The light intensity then was compared to the power of 8,000 candles [2] [3]. Floodlighting systems have improved continuously ever since. The images of players from the 1970s and 80s, with four shadows cast around them, are gone today, thanks to the uniform illumination of the playing field. According to FIFA regulations, today's modern stadiums must reach an illuminance of around 2,500 lx.[1] However, the World Cup playing field in São Paulo/Brazil as an example can be illuminated extremely uniformly at twice that intensity - 5,000 lx -, surpassing many of the world's state-of-the-art stadiums. São Paulo's floodlighting system consists of 350 headlights [4] [6], each powered by more than 2,000 watts and together reaching a wattage of about 725 kW.

Taking into account the Brazil World Cup playing schedule [7], the geographical location of the playing venues and their respective sunset times, about 40 World Cup games will have been kicked off under floodlights, amounting to approximately 3,780 min or 726,800 s of floodlighting (these figures also include estimated extra-time periods and penalty shootouts from the round of 16 onwards).Assuming an average of 725 kW installed power per stadium, the tournament will eat up a total of 165 GJ just for floodlighting. To understand this figure, here is a comparison: With the same amount of energy, an Olympic-size swimming pool (50m x 25m x 2m = 2500 m3 = 2500 t of water) could be lifted about 6.7 km into the air - 1000 m higher than Mount Kilimanjaro; or a mass of 2.8 t - half of the Apollo 11 command spacecraft which returned from the Apollo mission) could be transported from the Earth to the Moon.

To generate this amount of energy, ca. 4,600 l of fuel oil or 8.4 t of brown coal must be burned, leading to the emission of ca. 31 t of CO2. Again as a comparison, a small car would have to go 310,000 km, or 7.7 times around the Earth along the Equator, in order to emit the same amount of carbon dioxide. These approximations, however, were all calculated assuming ideal conditions, i.e. 100% efficiency and not considering halftime breaks, stoppage times or delays.

Higher standards in television broadcasts have also meant rising requirements for lighting equipments. As a result, HD transmissions are now easily done from all areas of the playing field, as are extreme slow-motion replays. Transmissions in 3D and even in 4k are becoming a normality.

Goal-line technology is another area where uniform and high-quality illumination is essential. To provide a clear indication as to whether the ball has fully crossed the goal-line, goals are equipped with seven high-speed cameras each, transmitting data at 500 high-resolution frames per second. Data in the GB range must be evaluated in real time to measure and calculate the trajectory of the ball. For more details see also "Keeping an eye on the ball" (SPIE Newsroom, 6 June 2014)[8]. 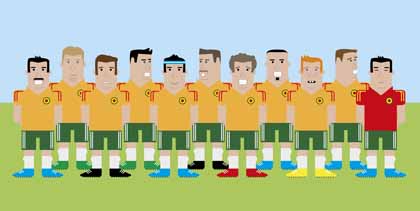 Fig. 1: With a shutter speed of 1/500 s the probability of a blink-free team picture is 76% - still, the goalie blinked! (Image Courtesy of Phillip Hastigsputh)

Photographers' work has been positively impacted in much the same way. Digital cameras allow for noiseless exposures with ISO speeds of up to 25,600 today, which would correspond to a film speed of 45 DIN in analogue photography [9] -- unimaginable even at the World Cup in France just 16 years ago. With an illuminance of 5,000 lx, today's photographers have a multitude of creative options at hand. Exposures at ISO 3,200, with an aperture of 5.6 and shutter speed of 1/2000 s capture even the fastest movements in outstanding quality. Vast enlargements can be achieved at ISO 400, an aperture of 2.8 and shutter speed of 1/1000 s.

Yet another challenge for photographers are 'blink-free' pictures of entire sports teams. The chance of achieving such a photograph has also risen in proportion to advances in shutter-speed technology, however. [10] - [12]

Thanks to photonics and digital technology, the number of photographs taken during the World Cup games is a record high as well: Estimates are that around a half million photos are taken per game, 32 million for the entire tournament. What is more, today's photographers can save and edit their pictures directly in the cloud instead of on memory cards, making them instantly accessible to editors around the globe. Assuming there are 200 accredited photographers (including also remote-controlled cameras) at a game, with an average of 2,500 takes per camera [16], they will produce a total of 24 TB of photographic material (125 GB per photographer). Extending this calculation to the entire tournament, each photographer will yield ca. 8 TB of material, amounting to about 1600 TB for all photographers together. In the cloud, it is much less - an estimated 7 GB per game per photographer, 1.5 TB altogether; for the entire tournament, 0.5 TB per photographer and ca. 90 TB altogether.Thanks to photonics, not only do we get to view ever finer and sharper images and broadcasts, but they reach us in real time around the globe. Through optical fiber, for instance, half a million photons are necessary to transmit one bit over ~100 km, requiring the energy of approximately 70 fJ (femtojoules, or quadrillionths of a joule). Transmitting 1 TB of data over a distance of 5000 km requires more than 25 quintillion (25*1018) photons and the energy equivalent of 0.5 kWh.

With smartphones, tablets and the like, modern-day transmission technology provides viewers with a multitude of options and enables them to be their own director [13] [14] through applications that were unimaginable even at the last FIFA World Cup in South Africa.

Finally, football and photonics sometimes play so well together, they create art! For example, the poster collection (below) "No Football -- Just Photonics," which was designed to advertise the 2015 "International Year of Light". In a series of schematic representations, it shows an optical comb generator, Raman scattering, a photo coupler, an optical ring resonator, an optical fiber, an optical amplifier, a Mach-Zehnder coupler, as well as erbium-doped fiber amplifiers, all working their magic on a soccer field. [15] 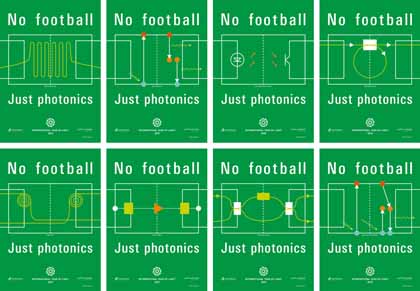 Dan Curticapean is a professor and head of the Media Technology Lab at Hochschule Offenburg University of Applied Sciences. He is a lifetime member of SPIE, and contributes papers regularly to SPIE symposia.